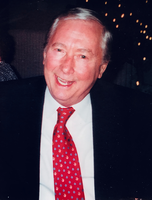 Donald W. Zeug, 89, a longtime resident of Upper Montclair, NJ passed away peacefully on Sunday, January 12, 2020. Don was born on December 21, 1930 in North Bergen NJ to William and Anna Zeug. He spent his childhood in Leonia, graduating from HS there in 1948. After working long days at his family owned Hudson County Knitting Mill and attending night school at Rutgers Newark, he was drafted into the US Army. He proudly served our country during the Korean War as a field surgeon’s assistant on the front line, attaining the rank of Sergeant 1st Class. After the war, he attended The University of Pennsylvania and graduated from Wharton with a degree in Industrial Management in 1957. Don had a successful career as a Plant Manager in the North Jersey textile industry highlighted by his ability to make the complex simple, focus on what needed fixing and getting it done. In his spare time he enjoyed riding his motorcycle on early Sunday tours, building balsa wood model airplanes from scratch and attending his grandchildren’s sporting events. He was grateful for family, friends and time spent together. Don is survived by his wife Dorothy, sisters Carol and Margie, (predeceased by sister Shirley) daughter Pam, sons Brian (Mary), Glenn (Maria) and grandchildren Erik, Kirsten and Julia. Visitation combined with a memorial service will take place at the Hugh M. Moriarty Funeral Home, 76 Park St, Montclair, NJ on Thursday January 16th from 10:00AM-12:00PM. In lieu of flowers, donations may be made to the Montclair Red Cross via the American Red Cross website or the Korean War Veterans Association.